Saito Kiyoshi is a woodblock artist from Aizu-Sakashita-cho, Kawanuma-gun, Fukushima Prefecture. He is a person of cultural merit. A self-taught artist, he established his own unique woodblock printing technique. He incorporated the techniques of Ukiyoe prints and the modern forms of Western artists to express Japanese emotions.

In 1949, at the age of 42, Kiyoshi Saito exhibited his woodblock print "Milk" at the first Salon de Printemps held at the former Tokugawa residence in Mejiro, Tokyo, and won the top prize. Later, this exhibition toured throughout the United States.
In 1951, when Kiyoshi Saito was 44 years old, he exhibited his woodblock print "Stare (Flower)" at the 1st Sao Paulo Biennial, and received the Japanese Award in Sao Paulo.
This was the first post-war Japanese to win an international exhibition, and it was an event that spread the potential of Japanese contemporary prints to the world.
In 1952 and 1955, the exhibitions "Kiyoshi Saito and His Friends" and "Three Contemporary Japanese Prints" were held in the U.S., and were highly praised by the New York Times.

Kiyoshi Saito's original woodblock printing technique incorporates traditional Japanese expression with modern Western forms.
The reputation of many of the works born from this technique spread overseas more than domestically, so to speak, as a form of reimportation.
In 1995, he was honored as a Person of Cultural Merit.
Then, in 1997, he passed away. He passed away in 1997 at the age of 90.

Other works of Kiyoshi saitō 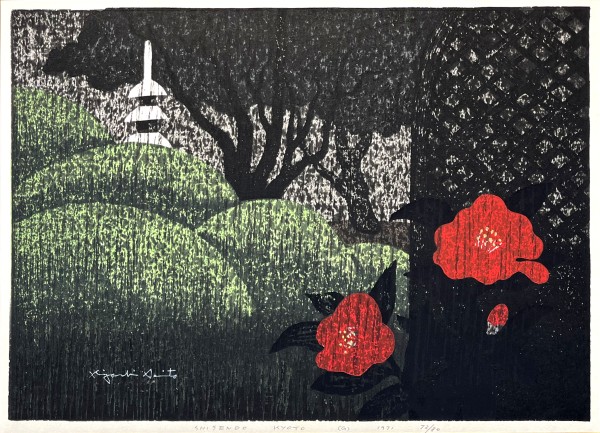